Seeking a Cure for the Long-Term Care Problem

By 2060, roughly a quarter of the U.S. population will be over age 65. Ruth Katz, the new senior vice president of public policy at trade group LeadingAge, spends a lot of her time thinking about how prepared the United States is to provide services like health care and housing to this growing senior population.

“Of people who are 65 years old today, more than half of them before they die will need paid long-term care services,” says Katz. “Today there’s 50 million people 65 or older, which is just under 15 percent of the population. By 2060 that’s gonna be close to 100 million people.”

Katz says ensuring that seniors have access to long-term care and long-term services is her goal as head of LeadingAge’s policy operations. The most pressing issue, according to Katz, is making sure there is a way to pay for it.

“You’ve got enough problems when you or a family member needs help with the basic activities of daily living, then you’re thinking about paying for it on top of that,” she says. 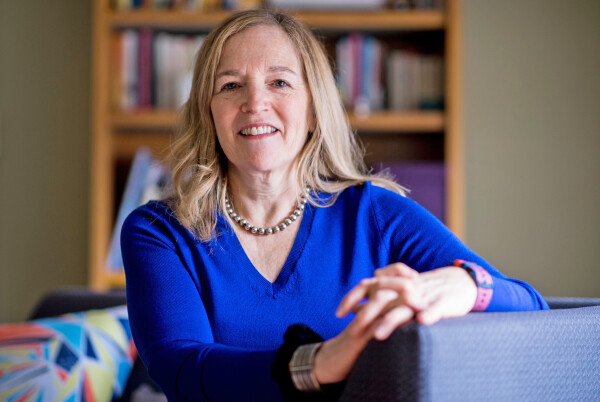 “We’ve got to figure this out,” she says, “so that when you’re 65, there’s a health care program waiting for you.”

LeadingAge is an association of more than 6,000 nonprofit senior-service providers, such as nursing homes and caregiver organizations. Katz will help coordinate the group’s legislative advocacy efforts, both in Washington and with LeadingAge’s state-level affiliates.

Katz has a long background with aging policy. She came to LeadingAge in January from the Health and Human Services Department, where she spent 27 years in the Office of the Assistant Secretary for Planning and Evaluation, the department’s in-house policy development and strategic planning office.

Within the assistant secretary’s office, Katz simultaneously served as the associate deputy assistant secretary for disability, aging, and long-term care policy and as director of the Division of Disability and Aging Policy, where she helped develop and coordinate HHS’s disability, aging, Medicare and long-term care policy agenda.

A native of New Jersey, Katz spent time with the federal government’s Head Start early childhood education program after studying special education in college. While her initial focus was in disability issues and advocacy, she eventually found herself focusing on the issues of long-term care and long-term support and services.

“I thought I could do a lot in a bigger way,” she says. “That’s when I really started doing policy.”

Katz says the biggest problem with the government’s long-term care policy for seniors is there’s no dedicated system, but a hodgepodge of different federal and state programs that overlap in confusing ways.

“Medicare doesn’t cover [nursing home care],” she says. “Nothing covers that except for Medicaid, which is a means-

tested program. Maybe you have enough wealth that you can just take care of it out of pocket. But we’re talking about spending on average a few hundred thousand dollars.”

Katz says protecting the social safety net for the elderly, especially Medicare and Medicaid funds, is one of LeadingAge’s legislative priorities at the congressional level.

“You look at the budget proposal that just came out of HHS this last year. It has some rather large changes,” she says. “I don’t think those budget proposals will become reality, but attacks on the safety net are attacks on everyone’s future.”

While at HHS in the 1990s, Katz worked on the issue of long-term care and services financing as part of the Clinton administration’s attempt to overhaul the health care system. While that effort was unsuccessful, Katz says several important provisions from the Clinton health care push were eventually incorporated into HHS’s long-term care thinking. One program, called “Cash and Counseling,” allows individuals to work with case managers to determine how their Medicaid dollars are spent.

Katz says the program allows for greater flexibility, such as paying a neighbor or relative for long-term services, instead of Medicaid only being able to cover a nursing home.

Even if funding is there to help with the cost of long-term assistance, Katz says the government can do more to ensure that there’s a support structure in place to provide critical aging services.

One area that LeadingAge’s affiliate members say is a major problem is assuring nursing home quality in a way that protects seniors but isn’t so burdensome that it “prevents providers from giving good care because they’re so busy with [compliance],” according to Katz.

Another issue is making sure there is a sufficient workforce to provide long-term care. “There is a dire need for people to provide at all levels,” says Katz. “It’s not just certified nursing assistants. It’s a whole field. We can’t get people to apply for these jobs.”

While health care and long-term services are central, they aren’t the only consideration at LeadingAge, says Katz. Another issue the group is advocating for is ensuring the government provides sufficient funding for housing assistance for seniors.

When working with policymakers, Katz says it is important to keep the focus narrow on LeadingAge’s specific policy goals without getting too lost in the weeds.

“One of the things I learned in HHS was how to write things that are really hard and really complicated that can make you glaze over really fast,” she says. “They’re not exciting issues until they matter to you personally, and then they all of a sudden get very compelling.”

Katz says that as America’s population ages in the coming decades, health care and service providers will need to work with the government to develop innovative methods of care that go beyond nursing homes and assisted living, such as an increased emphasis on community-based care. She says LeadingAge’s members are already developing some of these practices on the ground.

“What I would like to see is some work on thinking about innovative service models that span the range of what’s available now, and more, thinking about new ways of combining housing and services,” she says. “When there is money for people to get the care that they need, they have a lot of choice. They’ll be the choices people really want in the 21st century.”

This story first appeared in the Influencer section of CQ Magazine on April 9, 2018. CQ Magazine is part of CQ News and Analysis services.

How to Identify Your Best “Grasstops” Advocates

If your issue needs a human touch with a lawmaker, check your members’ personal relationships...